The relationship between Rue and Jules, commonly referred to as "Rules" among fans, began in "Pilot".

Rue and Jules finally meet at the end of Pilot, Rue is immediately mesmerized by her. The two go back to Jules' house, and Rue helps clean up a cut on Jules' arm. As the two lie side by side on Jules' bed and Rue tenderly moves a lock of hair away from Jules' face, the tone is set. There's an intimacy between these two, the start of a friendship, and maybe something more. 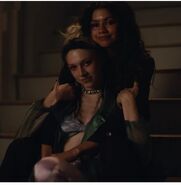 Retrieved from "https://euphoria.fandom.com/wiki/Rue_and_Jules?oldid=3819"
Community content is available under CC-BY-SA unless otherwise noted.