Nathaniel "Nate" Jacobs is a main character in the first and second seasons of Euphoria. He is portrayed by Jacob Elordi, while his younger counterpart is portrayed by Gabriel Golub.

Nate is a popular student and the star quarterback of East Highland High School. However, he has a deeply-ingrained sense of violent behaviour due to his ideologies regarding toxic masculinity, his upbringing, and the struggles he faces with his sexuality as a result. He uses his good looks, social status, and anger to mask his emotions and has a strained on-and-off relationship with Maddy Perez.

Nate was born to Marsha and Cal Jacobs, the latter of whom became wealthy and well-known due to owning "all the apartment buildings past Kemper" in the town.[4] At age 11, Nate came across an extremely graphic collection of recordings depicting his father engaging in various hook ups with young men and trans women. By age 12, he entered a rigid diet and workout schedule. While becoming his father's dream of being a star quarterback and a success compared to his mother and brother, he developed serious anger issues and warped perception of sex.

At some point, Nate entered a relationship with Maddy Perez, who he would often buy gifts for with his wealth. At his freshman formal, he attempted to finger Rue Bennett on the dance floor without her consent.

On a family photo hanging on his house's wall, a third, unknown, younger child can be seen alongside Nate and Aaron.

Nate is a conventionally attractive, tall, muscular guy with dark brown hair and eyes. He has a big mole on his chest to the left side.

Initially, Nate Jacobs comes across as a classic confident, asshole "bad boy jock' archetype, but with far more aggressive and violent undertones. He portrays himself to be hyper-masculine, charming, irresistible, and domineering, and routinely dominating people both physically and sexually to maintain his image of masculinity. He prides himself in his masculine traits, and displays a very cocky attitude regarding his relationships - bragging about his ability to sexually dominate women. However, due to the expectations placed upon himself by his perception of his father's masculinity, he is also very unstable, and sometimes demonstrates a very violent and unpredictable nature. He has a deeply ingrained sense of toxic masculinity because of his upbringing, and in moments where his masculinity is threatened, he displays a deep rage, and is shown to be overly aggressive, cruel and destructive. He justifies his beliefs under his rigidly ideology that things should be straight and in-order, and is extremely dedicated to proving to others - as well as himself - that he is an ambitious, prideful, and hyper-masculine individual.

Beneath his exterior, however, Nate is a very complicated man. While at a surface level, he is extremely intelligent, controlling, and judgmental of others, he is far more insecure of himself deep down. Despite his intense and aggressive exterior, Nate Jacobs struggles with fears that he will turn out like his father, and his fears that he is unassertive and insecure - that he is not the heteronormative view of masculinity - drives him to maintain control through masculine for validation. Most of his actions are fuelled by testosterone and shame, and this shame is rooted the fact that Nate has been aware of his father’s fetishes since he was eleven years old. Throughout the series, it is implied that on some level, he is not strictly heterosexual, and struggles deeply with that and the affairs of his father, which pressure him to maintain an image of leadership and masculine perfection.

Nate’s father’s double-life instilled in a young Nate a need for control in him, and much like how Cal Jacobs depicts a clean, admirable, and professional front to masquerade his more homosexual and erotic impulses, Nate similarly feels conflicted within himself. To others, he maintains an overconfident, arrogant, and aggressive facade, but deep down, is requiring of others submission to his rigid beliefs of masculinity to feel purpose, which is why he is so ambitious and driven to work out, play on the football team, and why he is so aggressive to those who oppose his views. In his mind, if he is not the perfect, idealized vision of a man - physically attractive, confident, ambitious, and dominant - then he is no better than his father, who's hypocrisy and double life traumatized him into perfecting his workout regimen and further ingrained his belief of hyper-masculinity.

Overall, Nate Jacobs is a portrait of someone whose pride and ambition have not been kept in check, as he drives himself to fulfill his own ideologies of toxic masculinity, and violently lashes out against those who oppose him. He is the embodiment of white privilege - the idea that, with enough power and conformity to normative values - one can gain the influence to get away with anything. This is what leads him to commit the insidious, wicked, and vile actions he does throughout the series - as all he does is an attempt to assert control and conform to his self-idealized image of what he believes masculinity to be.

Maddy caught Nate's eyes when, in Rue's words, he noticed she was basically hairless. However, Nate would often take his anger out on Maddy, at one point severely bruising her neck. Despite being aware, on some level, they are toxic for each other, it's a frequent plot point for both of them to break up and get back together, and use others to make each other jealous in the process.

In the first episode, Nate sexually harasses Jules twice: he catcalls her when she's riding on her bicycle, and threatens her sexually when they meet again at a party. The latter causes Jules to have an emotional outburst, as she pulls a knife on him and later cuts herself to prove that nothing can hurt her. After discovering Jules slept with Cal, Nate created a false online identity named Tyler and began to talk to Jules, tricking her into sending him sexual photos. Though it's implied that his initial intention was only to protect his father, it's partially implied that his feelings towards Jules may be sexual or romantic in question.

At the carnival, Nate (still pretending to be the fictional Tyler) asks to meet Jules by the lake, professing a romantic connection to her. He initially kisses her and puts his finger in her mouth, asking her to "open her mouth," which mirrors how his father treated her when the two were involved sexually. When Jules tells Nate to stop, Nate drops the act and threatened to go to the police with Jules' nudes, which would cause her to be registered as a sex offender and ruin her life, unless she kept quiet about Cal. Soon after Nate was accused of assaulting Maddy at the carnival, he used the leverage he had on Jules to force her to lie to the police about seeing Maddy assaulted by the actual Tyler, putting the real Tyler in jail. Though Jules hates Nate for blackmailing and threatening her, she has an attraction to him, as she is still in love with his "Tyler" persona. This is shown when she hallucinates Nate/Tyler in the club, confirming she fell in love with Tyler. Nate seems to continue to have feelings for Jules as well, following her, watching her house at night, staring at her and complimenting her to Rue. This is significant because Nate treats Jules much better than he does Maddy, never once calling her inappropriate slurs and speaks highly of her. Even when Jules called him and his father faggots, his retaliation was minuscule in comparison to his assault on Maddy, his then girlfriend, for even implying he's gay.

Cassie: "What you don't understand, Nate, is I am crazier!"
Nate: "That's not somethin' to be fuckin' proud of, Cassie!"
Cassie: "No... but it is something you should be scared of."
―Cassie and Nate[src] 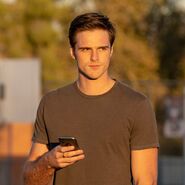