He was born in Brisbane, Queensland, Australia on 26 June 1997 to John and Melissa Elordi. He attended secondary school at St. Kevin's College, Melbourne, and later Nudgee College in Brisbane. Elordi has three older sisters.

His first experience on a Hollywood film set was in Pirates of the Caribbean: Dead Men Tell No Tales as an extra. His first acting role was on the Australian film Swinging Safari (2018). 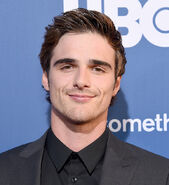 Retrieved from "https://euphoria.fandom.com/wiki/Jacob_Elordi?oldid=5156"
Community content is available under CC-BY-SA unless otherwise noted.