View source
watch 01:36
We're Getting Mutants in the MCU - The Loop
Do you like this video?
Play Sound

Fezco, also known as Fez, is a main character in the first and second seasons of Euphoria. He is portrayed by Angus Cloud, while his younger counterpart is portrayed by Mason Shea Joyce.

Though a school dropout and drug dealer, Fezco has a big heart and cares deeply about Rue's sobriety.

Fez was born as a son of Paulie, a strip club manager and an unnamed mother he never met. When Fez was still a child he was taken by his grandmother Marie O'Neill, a drug dealer, as his father was physically abusive to him, which led Marie to show up in his club one day and shoot him two times in his thighs for giving Fez a black eye. From that moment she became Fezco's caretaker.

Marie taught Fez everything she knew about dealing drugs, and would even take him with her to make deals with her clients, as she was treating him more like her partner than an actual grandson. While Fez was quite a good student, especially at math, his grandma's drug dealing business made him unable to focus on school.

One day, a woman left Marie her baby until 10pm, but eventually she never came back for him. Fez tried to take care of the boy but no matter what he did, he couldn't stop crying as he was missing his mother. Eventually, he was adopted by both Marie and Fez, who treated him like a family member from the start, even giving him an affectionate name "Ashtray"; from the one time when he tried to eat discarded cigarettes from the ashtray.

On one occasion, Marie went with Fezco to catch a client, called by her "Bowl-Cut" who was overdue with paying her money for drugs. Once she found him, she slowly approached him while he was eating a meal outside of the restaurant and attacked him with a crowbar. Fez tried to stop Marie from beating the guy but instead, he accidentally got hit by her, which caused him a memory loss for at least two months, except few images and an overwhelming fear of who's gonna take care of Ashtray. While Marie never directly apologized to Fez for what she did to him, deep down he knew that she was sorry and didn't mean to hurt him.

While Fez became responsible for drug dealing and helping his grandmother run a shop as well as taking care of Ashtray, Marie's health became more and more deteriorated until one day when she collapsed on the bathroom's floor; because of her occupation, calling 911 was not an option, so Fez decided to take Marie to the hospital alone by a car despite being too young to even drive, but Marie got help too late and was bedridden to the rest of her life, which left Fezco solely responsible for not only her drug business, but also running the store, and becoming the caretaker of both her and Ashtray.

Fezco is a young drug dealer, while also running a small shop. He is highlighted by the relationship he has with Rue in the series which is described as "friends". It is later known in the series that he thinks of Rue as his sister and acts in accordance to that revelation. He sells drugs to Rue on several occasions without her having to pay for it. His concern for her is first seen when his drug seller came by and manipulated Rue into taking fentanyl, in order to avoid him from sexually assaulting her he bought the substance. His concern for Rue is also seen when he decided to stop selling drugs to her for her own good. He listened to Rue complain about her friends and Nate's violence. He confronted Nate and passively threatened him.

Ashtray was abandoned with Fezco and his grandmother as a baby, offered as collateral for a deal but was never retrieved. He's then adopted by Fez and his grandmother, who raise him as their own and affectionately name him "Ashtray" after he tries to eat a burnt cigarette while taking a bath in the sink. For all intents and purposes, Ashtray is Fez's little brother, though Fez treats him with maturity and respect as he would an adult. Ash is also Fez's business partner, often present at drug deals and meetings with Mouse, he also sells to Rue in the first episode. While Fez became responsible for drug dealing and helping his grandmother run a shop as well as taking care of Ashtray.

Fezco was the one who sold drugs to Rue her first time, and has since been her drug dealer. Since "Made You Look", he and Rue have had a falling out as Fezco no longer wanted to sell drugs to Rue out of concern for her which resulted in an argument. Rue later on apologized and thanked him for not selling her drugs. He has multiple times stated Rue is his family, seeing her as his little sister.

Fez begins a friendship with Lexi during the New Year's Eve party in "Trying to Get to Heaven Before They Close the Door". The two talk about how their holidays were and Lexi explains to Fez on how the Christians stole Christmas. Throughout the conversation, it is shown that Lexi and Fez are flirting with each other immentent through the blushes that are on Lexi's face after Fez tells her how he started to miss her presence on the couch. The two exchange numbers before Fez beats up Nate. Lexi is seen defending Fez to Cassie in "Out of Touch" after Cal questions the girls about what happened at the party and it is inferred that there is a strong connection between Lexi and Fez on how Lexi is crushing on Fez. The feelings are also shown when Lexi visits Fez's store to warn him about what Cassie said to Cal as Fez stutters with what he wants to say. The two don't have any on-screen moments until "A Thousand Little Trees of Blood" when they watch Stand By Me at Fez's house as Lexi talks to him about the possible backlash about her play. It is further revealed that in "The Theater and Its Double" that the two had been talking for months and that Fez gets dressed up and wants to bring her flowers on her opening night. It is also shown that the two have hung out together with Rue as it is shown through the play.

Fezco is an adult male with red hair, blue eyes, freckles, and a shaved haircut who stands at around 5'10. 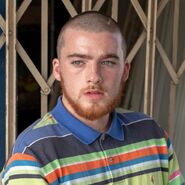