Shot in the head by S.W.A.T. member

Player (by Custer)
Bro (by Fezco)

Not much is known about Ashtray's life or his family prior to living with Marie O'Neill and her grandson, Fezco. One day his mother left him to Marie as a collateral until 10pm, but she never returned. Fez was the one to took care of him but initially Ashtray couldn't stop crying as he was missing his mother but eventually he managed to fall asleep on the couch alongside with Fez. On one occasion when he tried to eat Marie's discarded cigarettes from the ashtray, she called him "a little ashtray", resulting in his new name.

Both Marie and Fez treated Ashtray as their family, as he learned about drug dealing business in similar fashion that Marie taught her grandson in the past.[3]

Throughout the first season, Ashtray is mainly seen selling drugs to people from Fezco's shop. He also appears to live with Fezco and acts as a younger brother/shop assistant. We see that he also helps Fezco with their drug-dealing business as he is present during the exchanges between Mouse and Fez, and he is also seen flushing drugs down the toilet when they had the police called on them.

After Fez tried to settle Mouse for the drugs that he had to flush down the toilet by stealing the money from an unethical doctor, Ashtray, terrified that he may try to hurt Fezco, attacked both him and his partner, Custer, with a hammer, breaking Custer's nose, and killing Mouse in the process by hitting him in the head.

On New Year's Eve, Ashtray and Fez drive with Rue while on their way to meet with someone, as they need to switch partners due to Mouse's death.[3]

In "All My Life, My Heart Has Yearned for a Thing I Cannot Name", Custer tries to record a conversation to incriminate Fezco in connection with Mouse's murder. He strikes up the conversation by telling Fezco that the police found Mouse's body, causing Faye to drop a glass on the floor. As she crouches to clean the broken glass, she proceeds to show a sign of "be quiet" to Fezco, informing him of the phone recording everything that's being said. Fezco proceeds to act as if he has no clue what Custer is talking about, confusing Custer, as Faye steps in to say that Custer told her that Laurie killed Mouse, he denies this but she stands by her own statement to protect Fezco and Ashtray.

Ashtray grows more angry and this results in him stabbing Custer in the neck, killing him. Fezco then punches Ashtray to make it look like he's innocent, due to Fezco wanting to take the fall for his little brother. Ashtray doesn't want him to do this and proceeds to lock himself in the bathroom with a a bunch of weapons, ready to fire. While Fezco tries to persuade him to come out, the SWAT team finally breaks down the door and Ashtray starts firing as they reach the hall, accidentally hitting Fezco in the process. As Fezco pleads for him to stop, he does momentarily, which makes the SWAT start firing. It goes quiet, and an officer walks over to the door, finding Ashtray on the floor in the bathroom. Thinking he's dead, the officer turns around to inform the others. Ashtray then grabs his shotgun and shoots him, which makes the other officer down the hall aim at him and then shoot him in the head, as Fezco watches.

Ashtray was an average sized, rather stocky teenage boy. His face was roundish, and he had a brown buzz cut and facial tattoos under his eyes. He had dark eyes and light skin, and was usually shown wearing a gold chain around his neck.

Fezco: "Look, why don't you just tell us what you're trying to do, and we can tell you how we can help."
Ashtray: "Unless it's human trafficking. I don't fuck with human trafficking."
―Fezco and Ashtray to Kat[src] 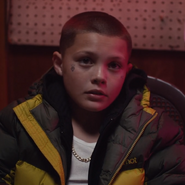