View source
watch 01:36
We're Getting Mutants in the MCU - The Loop
Do you like this video?
Play Sound

She is known for her roles as Maddy Perez in Euphoria, Alexis in Waves and Estee in Mid90s (2018).

Alexa born to Rose Mendez and Scott Wilson Vanerstrom, and was raised in Los Angeles by her mother grandmother, and aunts. Her mother is a makeup artist who emigrated from her birthplace of Michoacán, Mexico to the U.S. in the 1980s. She grew up speaking half English and half Spanish around her family, and describes herself as feeling connected to her Latin roots.[1] Her father, Scott Wilson Vanerstrom, passed away on October 6, 2018 at the age of 76.

On April 5, 2019, Alexa legally changed her name from Alexa Demie Wilson Vanerstrom to just Alexa Demie.[2] She has been dating singer-songwriter Christian Berishaj, who goes by JMSN, since 2017. Their relationship is private, though Alexa has appeared in a few of his music videos, such as Slide and Act Like I'm Not Here.

When she was in high school, she went to downtown Los Angeles, purchased a box of wholesale sunglasses and decorated them with jewels and other embellishments. She landed a retail order for a boutique in Japan and they glasses got popular resulting in A-List stars such as G-Dragon, Jennifer Lopez and Nicki Minaj wearing the frames. Alexa has released two singles titled: Girls Like Me, which dropped in 2016, and Leopard Limo (Archive LL11) in September 2021. She also featured in Pearl's 2016 track, Turnin' Tricks. As of 2019, she is working on her first EP.

When she was younger, Alexa frequently performed and sang for house guests and eventually began taking acting classes. After appearing in well-received projects including Brigsby Bear, Mid90s, and The OA, Alexa was casted for the role of Maddy in Euphoria after originally auditioning for another character.[1] 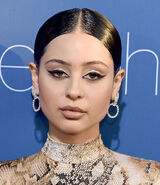 Euphoria's Alexa Demie Gets Ready For the Season 2 Premiere - Vogue