For the episode transcript, see here.

In the aftermath of the carnival, Maddy and Nate are forced to deal with a police investigation. Jules begins to feel pressured by her role in Rue's sobriety. Kat ignores a confused Ethan and embraces her new lifestyle. Cassie tries to distance herself from Daniel and focus on her relationship with McKay. Cal Jacobs worries about how his actions have affected his sons.

In her childhood, Maddy felt that everyone loved her, she did not know why but it was something that gave her confidence, she participated in beauty pageants, her confidence could have led her to win Miss Universe, if it had not been for a beauty coach. She liked Nate, before he asked her out. At first they developed a loving relationship, he was a gentleman, and she liked to make him feel good in bed. Then the relationship becomes toxic, to the point that he choked her at the carnival, when she asks him about the photos of his cell phone, but no matter what he did, she'd still love him.

Rue missing drugs but as a second prize she focuses on Jules instead, almost obsessively. As she begins to pleasure herself, Rue’s Mum bursts in causing a slightly awkward and strangely humorous exchange between them to occur. Things appears to be on the up for Rue with her Mum and their relationship is finally beginning to rekindle without the wall of drugs between them.

Unable to hide the raw red marks across her neck, Maddy is eventually found out at school. Given her molly incident at the carnival and inability to eat thanks to her comedown, at school she’s called into the Principal’s office where she’s asked if Nate is the one responsible. Maddy doesn’t crack but he’s determined – proceeding to quiz various kids around campus before calling Nate (and his Father) into the office.

The night of the carnival saw Kat have an epiphany about men, prompting her confidence to sky-rocket. At the mall, Kat bumps into Trevor, the store clerk she fantasized with approached her and invited her to hang out. However, she’s still angry at Ethan. Maddy’s Mother decides to press charges, much to the horror of her daughter. Cal meanwhile, is told to speak to his son before doing anything else. He tells Nate to keep his head held high and not to pay attention to the people around him as he’s marched out of school and into the local police station.

Upon withdrawing from school, Nate is seen by Rue and Jules, who then enter into a conversation where Jules asks Rue not to say that she had something with Cal, to which Rue asks if Nate knew anything, and that it was dangerous. Rue confess her brief and embarrassing hook-ups with a lack of meaningful emotion. Besides what she’s feeling with Jules, she’s never been in love.

Maddy is taken down to the station as well where she squares up to one of the officers, after throwing a milkshake, her hoodie is forcibly removed, and then they take photos of the bruises. In a room next door Nate is interrogated, where he tells her he grabbed her by the arm but didn’t choke her. He does tell the police she was high on MDMA though but it’s not enough to prevent Nate from being suspended.

After a good talk with Ali at the rehab centre about it, Rue admits the real truth to everyone in the group. She wasn’t clean all those times she said she was – it’s actually been 13 days – however Jules is the one who’s really helped her through this time. At a dinner at a restaurant, Jules is asked by her father if he has something with Rue. Rue texts Lexi, where she tells her that she will make up for her, for not being a good friend. Cassie tells McKay about the dick picks that Nate had on her cell phone to which McKay is confused. In a flashback, Maddy tells Cassie that she will go for her if she says something about those photos, then Cassie and McKay have a sincere conversation where he apologizes for having denied her to Nate, and tells her that he is proud to be her boyfriend. Kat and Trevor hang out, and she proposes to him to have sex.

In the last five days, Maddy had sent Nate 273 text messages, then she had argument with her mother, where she tells her that her relationship with Nate is nothing like her parents', that he would kill for her, and she for him. Maddy calls Kat but she says she's with a friend [Trevor], then she starts sucking him, but he finishes quickly, but she leaves with a smile on her face. Later that night, Rue, Lexi and Jules head to the roller disco together but as Lexi comments on Rue’s euphoric mood, Jules freaks out and heads to the toilets.

Cal heads back to the familar hook up spot at the motel but midway through his time with a random guy he has second thoughts. He talks to him about the rage his boys are feeling and how scared he is they’ll follow in his footsteps, wondering whether what he’s doing affects them. While out driving, Maddy receives a text from Nate telling her to meet him at the hotel off Exit 27. Hopeful, she speeds up toward the rendezvous point where we ironically find out it’s the same hotel Cal left moments earlier. Nate and Maddie then meet and embrace while Rue falls asleep on a terrified Jules.

Maddy knew who she was from a very early age. For as long as Maddy could remember everybody loved her."

"She never knew exactly what it was. She just knew that she had something special. Something intangible. Something measurable. It gave her confidence. That's why she loved pageantry."

"It wasn't the violence that scared her. It was the fact that she knew no matter what he did, she'd still love him"

Euphoria episode 5 promo HBO
Add a photo to this gallery 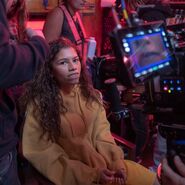 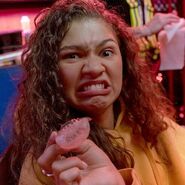 Retrieved from "https://euphoria.fandom.com/wiki/%2703_Bonnie_and_Clyde?oldid=4867"
Community content is available under CC-BY-SA unless otherwise noted.